There are no official products announced at this time that will be using the new Android L operating system but the first products should reach market sometime this fall. It should also be noted that this OS is going to be used for a wider variety of applications than just smartphones and tablets. 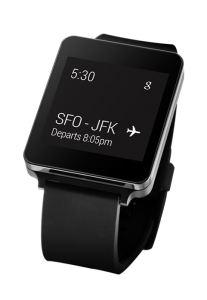 Google had previously announced its Android Wear platform for smartwatches months ago but at the event, more details about what the devices can do and when some will become available was presented. Features highlighted include the ability to display important information like reminders, contacts and messages, take voice commands rather than having to pull out and use your Android phone, access and control music with voice or touch, and of course be used as a fitness tracker for steps as well as heart rate.

In addition to showing off the features, they also announced two of the first watches to be available. The LG G Watch is available for pre-order right now from Google’s Play Store for $229. Samsung;s Gear Live should be available for order soon at $200. Sadly, the Moto360 device that was shown off before won’ be arriving till later in the summer with no pre-order announced.

Chromebooks and Chromeboxes have made major inroads into the low cost computing market but they have some serious limitations in terms of the software. In fact, I even stated that I would rather get an Android tablet over a Chromebook. This may change though with Google announcing that they are going to work on getting more Android apps to run under the ChromeOS used by the devices (not necessarily the browser though). Of course not all applications will be able to run as touch interfaces don’t always translate to a mouse and keyboard. It is nice to see the effort though as it will greatly expand what Chromebooks will be able to do.

Google Gets Into Fitness Tracking

There are a huge number of options out there for fitness trackers as just about every company seems to be producing one now. Google is jumping into the market not with a product but with its Google Fit platform. This will be integrated into the L version of Android to allow easy synchronization of data with a wide variety of fitness trackers on the market. There was no a mention if that data would be stored by Google along with all the other data their services collect but I’m sure they will be using it for their data integration.

Yet Another Attempt to Enter The TV Market

An Android TV micro-console from Razer

Remember Google TV? It was an attempt to try and build a unified smart TV experience. Sadly, the features and functions never really took off with consumers or manufacturers. Well, today the company is trying yet again to get into the TV market with Android TV. Think of this as a refined version of Android to be integrated into Smart TVs and streaming boxes. The difference here is that they are trying to do much more than just stream TV. In addition to being able to access the Google Play store for buying and renting media, consumers can also stream media through a variety of services but it will also be able to play games similar to what Amazon did with its Fire TV box. It will also be able to function like a Chromecast stick by allowing you to mirror your Android tablet or smartphone to your HDTV. It even will have integration with Android Wear smartwatches for controls. No word on when products will be available with it.

Google In Your Automobile

Not to be outdone by Apple with its CarPlay integration for iOS, Google today announced Android Auto. Essentially, it offers pretty much the same level of features and integration that Apple already demonstrated but linking to an Android based smartphone rather than an Apple one. So you will be able to access music, navigation, contacts, reminders, etc. They worked with 28 different auto makers as part of the Open Automotive Alliance. Car companies involved include Abarth, Acura, Alka Romeo, Audi, Bentley, Chevrolet, Chrysler, Dodge, Fiat, Ford, Honda, Hyundai, Infinity, Jeep, Kia, Maserati, Mazda, Mitsubishi, Nissa, Open, RAM, Renault, Seat, Skoda, Subaru, Suzuki and Volvo. The features are tied to the L version of Android which has not been released so there is no details on specifics as to when consumers may be able purchase cars with the feature.

Why Is Google Trying to Do Everything?

As you can see from all these announcements, Google is basically trying to get themselves setup in just about any aspect of one’s digital experience. Now this integration should make it easier to tie your digital devices together as well as transfer information. The key to Google though us the information. They built their dominance by being able to collect and analyze search data to better target consumers for ads where they make all their money. With the push out into all these other areas, they are essentially trying to expand the amount of digital information they collect and collate to improve their ability to monetize that data.

Many people may not think much about this but just consider the implications. The what and how your do things from driving, fitness, eating, watching, listening, etc they can collect from these various aspects. They can then use this information to generate better profiles of individuals. That information is then collated and sold off to other companies or used for their own purposes.