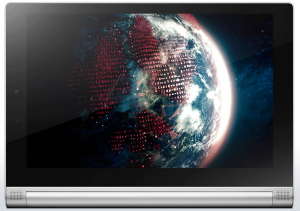 When Lenovo released their Yoga tablet last year, it was a very different design that featured a rounded handle area for easier holding than a traditional flat design. of it, I noted that while the tablet certainly did provide one of the longest tablet experiences available, there were a number of shortcomings including a lower resolution display and some sluggish performance from the processor they used. Yesterday, Lenovo announced their new Yoga tablet lineup and they addressed many of the issues that I had with it and then went even further to try and improve the product.

What’s Changed With the Yoga 2 Tablet 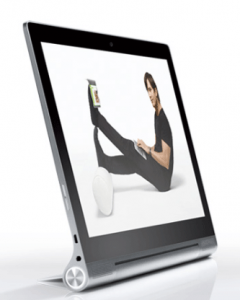 The two biggest complaints with the Yoga tablet were the screen and the performance. Lenovo has directly addressed both of these by moving from WXGA (1280×800) displays to full 1920×1080 screens to fully support 1080p HD video. This improved the detail and clarity of both video and text on the tablets. As for the performance, they have moved away from a rather tepid A7 based arm processor to an Intel Atom processor that should deal with the interface lag present in the original model.

The fold out hinge has also undergone a few minor changes. One of the issues with the original was how hard it was to pull the hinge away from the tablet. The new hinge is improved so that it is easier to get and also offers a wider range of tilt adjusted when it is used in the upright mode to better deal with glare and reflections. The hinge also now features a small cutout to it for a new hanging mode. This allows the screen to be hung for easier viewing without having to hold it or set it on a surface. The one downside is that when it is hanging it will be more difficult to use the touchscreen without causes it to sway. 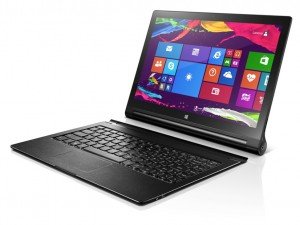 If Android is not you thing and you want to be able to use the Windows software, then Lenovo has you covered with a new set of Windows based Yoga 2 Tablets. They offer the same hardware specs as the Android versions but double the memory to 32GB and a black anodized case instead of the silver. This may be useful for those people that are looking for a low cost and portable computer that they can use for productivity such as Office 365 which is included for one year with the purchase of the tablet.

In addition to the tablets, there is an optional wireless keyboard that can attach magnetically to the tubular hinge of the Yoga 2 Tablet to provide a laptop like form factor. When you are done with the keyboard and tablet, the keyboard and also be attached to act as a cover for the tablet and keyboard. Don’t worry if you want an Android version, tt will also have the keyboard. It was only presented with the Windows version in Lenovo’s press materials.

In addition to the 8 and 10-inch tablets, Lenovo has also introduced an even larger 13-inch Yoga 2 Pro tablet that is focused heavily on being a media entertainment center. This is evident by the various display and audio improvements that the larger tablet get. For instance, the 13-inch display features a higher quad HD (2560×1440) display to provide a more vibrant and detailed image. Of course, most streaming media is still limited to just 1080p but it does allow for some improved streaming for some content online but still not 4K levels. 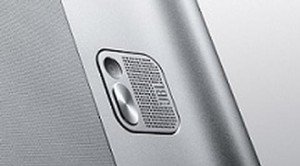 Audio is also improved with the inclusion of a new flat subwoofer on the back of the tablet. This provides it with much deeper sound that is typically found in a tablet and is once again great for the media experience. Of course, those that want even better audio would probably be using an external audio device like a wireless speaker or headphoens.

Another surprising addition to the media capabilities is the inclusion of a pico projector into the tubular hinge area of the tablet. This can project a full HD image up to 50-inches in size to allow for a more home theater like experience that can be shared with others. While the feature is very unique, it does have a huge drawback to its use. While the tablet provides around 15 hours of projected battery life in normal use, it drops down to significantly to just around 3 hours when using the project. Long enough to watch a movie but you might consider leaving it plugged in to charge for longer watching marathons.

The Android versions of the Yoga 2 Tablet should be available immediately to order from Lenovo with prices of $249 for the 8-inch version and $299 for the 10-inch model. The 10-inch Windows version of the Yoga 2 will be available at the end of October for around $399. The 8-inch Windows version will follow some time in November with a price of $299. The Yoga 2 Pro tablet will feature a $499 price tag with availability at the end of October.