The big news in TVs this year is likely going to be 4K resolutions but the manufacturers of the display had in mind something else, curved displays. The reason that this is not catching on much with consumers is that the curved feature is reserved for the higher end TVs. The costs of curving a screen is much more affordable though if you are looking at a small screen such as a PC display. A number of companies are now jumping into the curved PC monitor market. Is this enough of a feature though to make consumers pick it over traditional flat displays?

Same Arguments as a Curved TV

I won’t go into the pros and cons much of a curved screen as I already covered most of that in my Curved TV article. Suffice to say the primary point that the manufacturers will use is the immersion factor of the curved screen. If you have ever been to an IMAX dome, you can understand how immersive it can be. It can actually induce motion sickness for some viewers. Such experiences can only really be had when the screen completely envelopes the viewer. Smaller curved screens won’t provide that level of experience.

The only way to get truly immersive is to use multiple screens. By putting together three of the displays, it really does surround the user such that they can feel like they are in the game. This is because the curve helps keep a more consistent angle to the viewers eye than three straight but angled displays. The downside here is that many people do not use multiple screens as it requires more powerful hardware and much greater expense for the extra monitors.

Immersion with a display can be achieved in multiple ways. Trying to get the curved angle of the screen is one way to provide it. The big issue for the display is that it more are still relying on a 1080p display panel. So while the screen may wrap around your field of vision better it is doing so at the same resolution as smaller screens.

So, what are other ways to improve the immersion with a display? The most obvious is to provide a more detailed display. If you have more pixels on the panel, it provides a more detailed screen. A 4K display panel will provide four times the number of pixels as a 1920×1080 display. The downside to this is that the increased resolution generally carries a higher price. Most of the new curved displays are likely going to cost more than a similarly sized traditional flat panel of the same size because of the cost to produce them. 4K display panel prices have been dropping dramatically. What once used to cost nearly a thousand dollars can be found for only a few hundred more than a traditional display. This makes a tough choice for consumers. The higher resolution generally provides a great benefit than a curved display.

The other method for immersion is with higher refresh rates. This may not make sense at first but if you have a display that can go up to higher refresh rate, then it has the ability to provide a higher frame rate that gives it a smoother image. The average LCD display tops out at 60Hz or frames per second. Faster displays like the can go up to a 144Hz rate and is priced below $400. This provides it with over twice as fast of a screen image that can give very fluid motion provided your PC graphics can support it. It is fast enough that you can use something like the NVIDIA or AMD 3D kits to get a 3D image out of the screen. 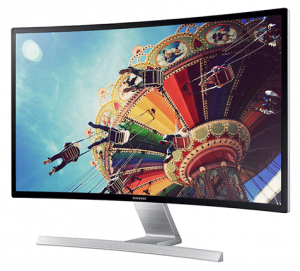 One piece of information that I have left out here is the panel technology used in these displays. Most displays still use TN panels because of their fast response times but they offer less color and viewing angles. IPS on the other hand provides excellent color and viewing angles but at reduced speeds. VA sort of sits between the two by offering great viewing angles and good speeds but short of the color that an IPS panel does. There are many affordable IPS displays now that offer solid performance. Hopefully manufacturer’s won’t rely too heavily on the TN as a means to boost profits in new displays because frankly once you see a nice IPS panel, it is hard to watch older TN displays.

So, would you consider getting a curved display over a traditional flat display? Personally, I would not. There just isn’t enough of an advantage of curving the surface of such a small screen. Pricing of course is going to be the major factor here though. If the curved displays cost roughly the same as a flat counterpart, then it may be worth trying it out. If they cost as much as higher resolution panels, then I would definitely pick the higher resolution panel over a curved display.