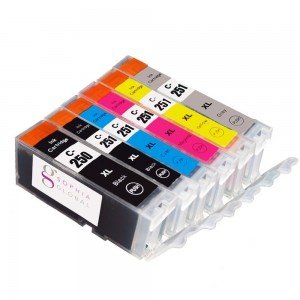 Have you heard of the notion of razors and razor blades? It is an economic concept in which a company sells.the razor at a low cost because it sells the blade refills to the consumer for the life of the product. Computer printers follow the same principle. Most inkjet printers sell for around $100 or potentially less. Consumers quickly find out though that the cost of replacing the ink cartridges can cost as much as the printer itself. How can consumers reduce this overall cost? For some printers, there is the option of 3rd party ink from other companies than the printer manufacturer at generally at a much reduced cost. Sophia Global is one such company but how good is their ink?

My testing of the Sophia Global ink is being done on the Canon Pixma MG7120 inkjet printer that I reviewed in the past. In that review I mentioned the high cost of replacement ink. To replace all six of the ink cartridges with official Canon ink ends up costing around $112 via Amazon. The compatible Sophia Global ink cartridges cost only $22 for the complete set of cartridges. That is less than a fifth of the cost. In fact, the entire replacement set of XL sized cartridges is not that much more than replacing a single official Canon color XL cartridge. This is why it is so attractive for consumers to use the third party ink.

The one thing that I cannot comment on is the durability of the ink on the printouts. The oldest printout I have is roughly two months old and it seems to be holding up well compared to a older similar print from the Canon Ink. Of course, this probably wont be as much of an issue because if it does hold up even only half as long, the ink is so cheap that you can just print another copy. Besides, if durability of the printout is critical, a professional photo print is probably a better choice for photos and laser for text.

Overall, I have been extremely pleased with the ink from Sophia Global for my Canon printer. The cost savings alone is more than worth the investment in the ink and if I had to do frequent printing, I would definitely be using it over the official ink. Now some reviewers on Amazon mention leaking ink cartridges, I have not encountered this problem but even if I did in even just one of the cartridges, the overall cost to replace it would still make it far cheaper than official ink.

Now one major problem some people have is whether they can even get third party ink. For instance, my Canon has several third party options. My father happens to have an Epson printer that does not have the option for ink outside of the official cartridges. His only options may be to try ink refills (which I have not tested) or potentially buying another printer. So, if you are shopping for a new printer, consider looking to see if you can get other third party ink cartridges as part of your buying research.

3 thoughts on “Can 3rd Party Ink Cartridges Work As Well As Name Brand Ones?”