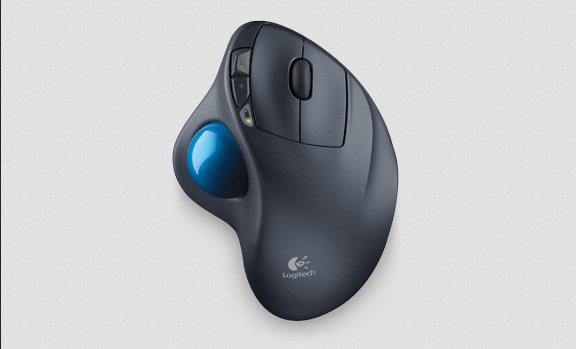 The average computer user has to deal with either a mouse or trackpad to navigate their computer operating system and use their various programs. While they work perfectly well with Linux, Mac OS X and Windows visual operating systems, they do have their drawbacks. Surprisingly, I personally don’t use either of these devices if I don’t have to and instead use a trackball. Trackballs have been around almost as long as the mouse but are pretty much neglected by consumers for the various different wireless, LED, Laser and multitouch offerings of mice and trackpads. So why do I use one and think you should consider using one?

If you use a computer all day long like I do in my work, having to use a mouse for extended periods of time takes a major toll on your wrist. All that movement back and forth across a desktop can lead to some major wrist pain. Trackpads are an improvement in that you don’t have to move your wrist as much as it is transferred to the fingers but you still have to move the wrist and arm when doing broad motions with the cursor. Read the article Trackball vs Regular Mouse for some good insights on the difference between the two devices in terms of ergonomics and performance.

A well designed trackball such as the Logitech Trackball (formerly Trackman Wheel) can greatly reduce the chance of wrist pain. I switched over to the trackball device back in the late 1990’s while working in a technical support department right after college. The device is molded so that you just rest your hand down on top of it with your fingers over the buttons and wheel and the thumb in a natural position over the ball. This transfers all that motion of the wrist directly to just your thumb. Since the thumb is an extremely flexible digit and can move freely up, down, left and right, the motion of the cursor is extremely fluid. You also don’t have to pick up the mouse to reposition it if the cursor doesn’t quite track to the edge of the screen if your mouse space is small.

Many people who first try and use a trackball are worried about the accuracy of the device. It does take a bit of a time to get used to the motion especially when you are trying to track fairly straight vertical or horizontal lines. The fact is, a trackball is just as accurate as a mouse and more so than a trackpad. Many early graphics designers preferred using trackballs over mice when working on computers. Of course, these days most artist rely on digitizer tablets to provide the smoothest level of control when it comes to art.

Great Alternative to the Travel Mouse

If you have a laptop and despise using a trackpad and don’t want or have a touchscreen display, the wireless trackball is a great alternative to a compact travel mouse. Why? It all is about the space required to use one. With the trackball, you just need enough room for the device and you have the full range of motion. If you have a small space such as an airline tray table, the compact travel mouse can be extremely difficult to use. You can only mouse in a given space and it will often require you to pick up and move the mouse more than if you had a standard desktop space. This makes it even less ergonomic than if it was used in a standard setting.

Gamers are one of the big markets for mice. They go on and on about dpi, tracking accuracy and response times. Some models are adjustable in size and even offer weights. All of this can translate into extremely high price tags. It isn’t uncommon for many gaming mice to cost upwards of $100.

Frankly, I have been using trackballs for PC gaming ever since I first started using them over fifteen years ago. I play just about any type of game on the market from role playing, strategy, adventure, puzzle and yes even first person shooters. In fact, I currently play the online massive first person shooter Planetside 2 and don’t have any issues with accuracy.

In fact, I prefer having the trackball over a mouse because the open ended nature of the first person perspective which means that you can spin your cursor infinitely in just about any direction. To do so with a mouse means that you have to repeatedly lift up and reposition the mouse. With a trackball, all I have to do is lift my thumb and move it over to the other side of the ball. It is faster and requires much less movement.

About the only disadvantage with a trackball over a gaming specific mouse is the number of buttons on it. In the case of the Trackball M570, you have just five buttons. Some people may argue that the wireless nature of the current Trackball M570 is also a disadvantage because it adds some latency. This is true but unless you are at an extremely professional competitive level, the advantage is not likely going to be much.

Basically, if you have any problems with your wrist or forearm from having to use a mouse or a trackpad, I would highly advise trying out a trackball. The ergonomics alone are a major benefit for using it as your primary cursor control. It certainly helped me with my problems. I also think those that travel frequently but hate the built in trackpad and don’t like to use those tiny sized travel mice. Gamers are going to be the hardest to convince to use it over their beloved mice. I’m fine with that decision but think it is still in their best interest to at least try one to see how they might give a different perspective on their games.

There is one other drawback to the existing Logitech Trackball M570 which is also true for many other things in the computing world. It is molded specifically for the right hand. This means that some people who use their left hand for the mouse like my father are out of luck as Logitech does not produce a left hand version. They do make the ambidextrous but it is not as ergonomic.