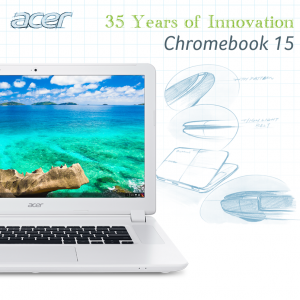 Prior to this official opening of CES, Acer announced plans to release a new , the first Chromebook to feature a 15.6-inch laptop display. This is fairly significant news for several reasons. First, it is showing that the sales of Chromebooks have been quite good and that companies like Acer are trying to diversify their products. Second, companies are willing to take risks again which has been a bit of a problem that last few years with various sales of technology slipping. But is making a larger 15-inch Chromebook the right answer?

Now Acer knows that the primary reason that most people are buying Chromebooks is because of their low cost. Most Chromebooks feature a price anywhere from $200 to $300. In contrast, most Windows based laptops have a starting price of roughly $400. Of course, the is priced as low as a Chromebook so that might not be the case for very long. Initial pricing for the Acer Chromebook 15 is going to be $250. This puts it at roughly the same price as existing Chromebooks which is good because if the price was too much higher, many buyers would probably just get the current 11-inch models at the lower price.

Chromebook’s rely heavily on being connected to the internet even though they have added more offline functions. Because of this network speeds are pretty important. Acer is now including 802.11ac Wi-Fi support on the Chromebook 15 which expands the capabilities with improved bandwidth and 2.4 or 5GHz spectrum support. This is a great addition to a low cost system as many much more expensive laptops still lack this feature.

One of the big appeals to Chromebooks was their small size making them extremely portable. By moving to a 15-inch display screen, the Chromebook 15 is roughly twice as large (15.4″ x 10″) and heavy (4.85 pounds) as an 11-inch Chromebook. This negates almost all of the portability factor that many people see as an advantage for the systems. Most Windows laptops are still in the 15-inch size range which means that they were less portable. Now this Chromebook is as big as budget laptops which is not going to appeal as much to those that want to carry it with them.

With the large size of the laptop, you would expect that many of the features of the laptop would also get correspondingly larger. One problem many of the 11-inch laptops have is the cramped space they have for the keyboards. The small keys and tight spacing can make typing difficult. A larger deck to fit the 15-inch screen means that there is space for a larger keyboard. But all the press shots supplied by Acer show it with a keyboard that is roughly the same size as a 11-inch Chromebook.

There are still enough unknown factors about the Chromebook 15 to say whether it will be a hit with consumers or now. For instance, Acer has not mentioned how long the battery life will be on it. The larger display is going to use more power which means that a larger battery will be needed to keep up similar running times as smaller units. Of course, this adds to the weight and cost so Acer likely won’t be adding too much larger of a battery pack.

Performance is also still quite unknown. The new 5th generation Core i processor designs from Intel are going to be used but we don’t known specifically which processors they will be. Most likely they will be the lowest Celeron models. Now, the new 14nm architecture should provide roughly equal performance to the 4th generation models but likely with lower power consumption. This is just conjecture though as the specifics have not been released yet. It is safe to say that it should be roughly the same to may better by who knows by how much.

Overall, I applaud Acer for taking the risk and attempting to produce something difference in the Chromebook market. I suspect that sales of this new Chromebook will probably not be better than that of the smaller 11-inch models. The problem is that while the costs have been kept low, the majority of the benefits of moving to a large laptop don’t seem to be present. If it had a higher resolution display and large keyboard, then maybe more people would express interest in it. This is just my speculation though. We will find out once Acer releases the product sometime later this year.