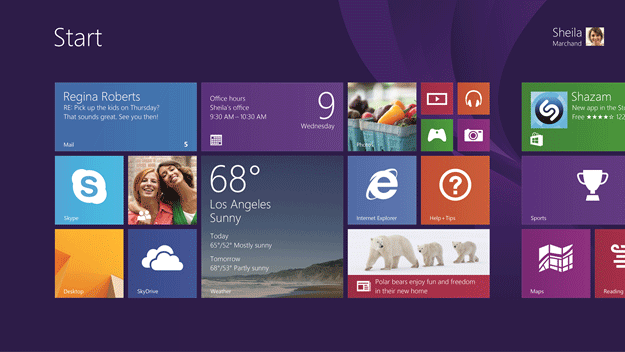 Today is the launch of Microsoft’s Windows 8.1 software update. For those that happen to be running Windows 8, the update is free while anyone on a previous version will have to pay the standard upgrade cost of $120 ($200 for the Pro version). At first glance, not much seems to have changed on the operating system but there have been a number of crucial changes that really feel like they should have been in the original release of Windows 8 last year. So let’s take a close look at some of the features that have been added and then whether or not this is an upgrade to consider. 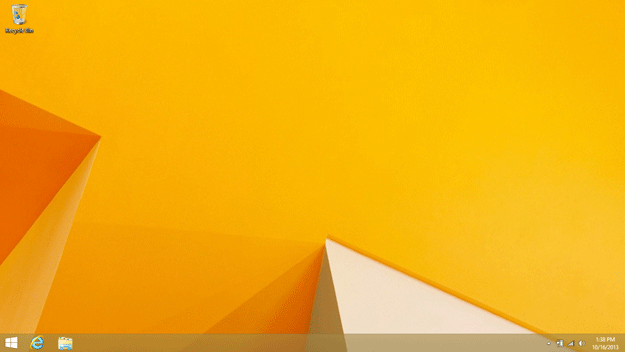 Many users of Windows 8 noticed that there were two very different interfaces. The primary interface you were placed in was the Modern interface with its new tiles and touch friendly design. Of course once your launched your programs, most went into the Desktop mode that looked very much like the past Windows 7 except there was no start button.

There are two changes that Microsoft did to improve the Desktop mode for users. First, you can now bypass the new start screen and go straight to the desktop mode. Since most people tended to ignore the Modern interface, this was useful but the Desktop mode in Windows 8 lacked any form of start menu like the old versions which meant you either had to get a to mimic the old Windows 7 start or you switched back to the Modern interface to launch your program thus going back and forth. Well they have put in a new start menu button on the new Windows 8.1 Desktop as seen by the small window icon in the lower left of the screenshot above. The only problem is that this button essential just takes you back to the Modern interface rather than a real start menu like Windows 7. So, you will probably still want one of those start menu replacements if you don’t want to keep switching back and forth.

To offset the jarring nature between the Modern and Desktop interfaces, Microsoft also made a minor but important change. Instead of each interface having different backgrounds, they now can share the same background image or color. By having this, pressing the start button looks less like you are switching between two interfaces and more calling up an overlay. It gives the appearance of a single unified desktop mode even though they are still two different ones. 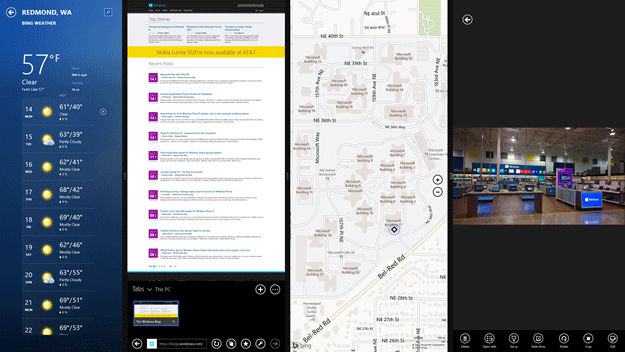 Multitasking under the new Modern interface of Windows 8 was less than desirable. It was only possible to have two applications on the screen at the same time. One would take up two thirds of the screen while the other would take a third. For many people used to high resolution displays that would run a large number of applications, this restriction seemed unnecessary. After all, a 2560×1440 display would be broken into a roughly 1700 pixel wide and a 860 wide application views with no ability to adjust them to different sizes.

Thankfully, Microsoft has corrected this multitasking in two ways with Windows 8.1. First, you can have up to four total applications on the screen at the same time, double what the old version did. Secondly, each of the applications can have their widths adjusted as needed. Thus, if you want to have a chat app and not have it take much space, you can make this narrower while your web browser and email take up larger portions.

In most operating systems to date, the search function would just look for programs and files within the storage on the computer. With Windows 8.1, Microsoft is introducing its Smart Search function that utilizes Bing to also provide results that may be relevant to information on the internet to your search terms. The results of the search will be broken down by local versus internet available information. IF you don’t want to search the web because you only want a local file, there is a drop down menu to change this to just files rather than everywhere.

Microsoft has a more detailed example of how this feature works in an .

If you are already running Windows 8, there is no question that the benefits brought by Windows 8.1 are certainly beneficial. The fact that it is a free update as well means that it there is pretty much no obstacle to doing this as you just need to use the Store tile from the Modern interface or find it under the apps menu.

The decision of whether to upgrade is more difficult if you happen to be running an earlier version of Windows like Windows 7. The new features certainly make it cat more like the past versions but it still isn’t quite the same. I would say that if your computer is getting older and you have been holding off on buying a new computer, buying a system now with Windows 8.1 is certainly a better situation than it was with Windows 8. There will be some adjustment, but it won’t be as bad. If you are on a computer that is working just fine and you don’t need to upgrade your hardware, the $120 or $200 upgrade cost for the software is enough to make it less than ideal still. I personally probably will not upgrade until my computer needs to be completely replaced.