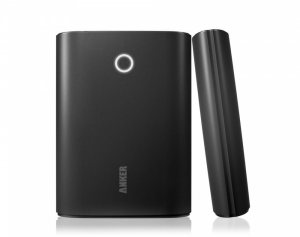 Previously I talked about using external batteries as a way to keep your smartphone and tablet devices charged even when you do not have the ability to plug it into the wall. Recently, I purchased an Anker 2nd Generation Astro3 12,000mAh battery to use with my iPad Mini Retina tablet and an iPhone device to see just how well it can work for extending your running time. The device overall has very strong reviews at Amazon, which happen to be the same reviews that are posted to Anker’s site. Is this a solid enough choice for those looking to use it with a tablet and possibly a cell phone?

The Battery and Accessories 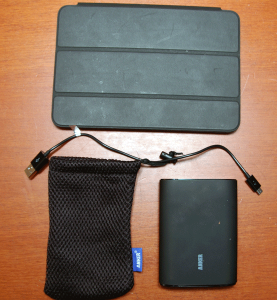 Astro3, Pouch and Cable Next to iPad Mini

The Astro3 2nd Generation device is a very simple package. The box comes with the battery unit, a 10-inch standard USB to micro-USB cable for charging and a small cloth pouch to hold the battery.

The battery pack itself comes in either a black or white color. It is constructed of plastic and is relatively lightweight at just over ten and a half ounces which is just under the weight of my iPad Mini. The dimensions are about the size of a mini moleskin notebook at roughly four and a half inches tall and three and a third inches wide but twice as thick at just over an inch. The dimensions make it more similar in profile to a short and fat smartphone than a tall and thin tablet. The exterior of the body is covered in a soft touch coating that make it easy to grip. 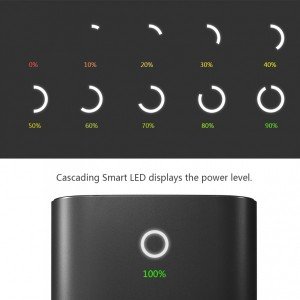 The only display on the Astro3 is a circular set of ten white LED lights. When the device is woken up to check capacity, it will display a rough percentage of the battery capacity by the number of LED lights. When it is charging a device, the lights will slowly pulse on and off showing the relative capacity. When the Astro3 is being charged, it will display the current capacity with solid lights and pulse the remaining capacity lights. When fully charged, the lights will turn off.

In terms of ports, the 12,000mAh version of the Astro3 has four ports. Three of them are standard USB sized ports and are the output charge ports. One of these three is labeled as a Smart port while the other two or Universal which I will discuss later about charging devices. The smaller micro-USB port is the charge input port for adding power to the Astro3 battery pack.

One of the unique aspects of the Astro3 battery is how it is powered on. Many battery packs tend to have a power switch to determine if power will be sent out of the power ports. In the case of the Astro3, this is handled by its “shake to wake” function. In essence, there is a motion sensor on the device that draws power at all times. When it senses a shake, it wakes up the power display to show the current capacity of the battery pack and then supplies power to the ports. In reality, all this does is wake up the display. If you plug a device into one of the power output ports, it will also wake up the display. So there is always some power being sent to the ports to detect if a device is plugged in. Even with the display frequently waking up for motion, it puts such a low load on the battery that it should still keep its charge for some time when unused.

As noted above, the micro-USB port on the Astro3 is used for charging the internal battery. Anker recommends that the device be charged via an external USB power adapter rather than attempting to charge it through a computer. This is due to the low power output of the USB ports of just 500mA for USB 2.0 and 900mA for USB 3.0. Of course hooking up the Astro3 to a desktop computer might be difficult with the supplied USB cable. I tested charging it via the powered USB port on my monitor and it does charge extremely slowly such that it will take over a day to get a full charge. 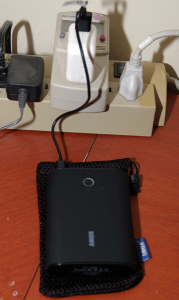 Most people generally have a USB compatible power adapter that came with the devices that they will use the Astro3 for. In my case, it is the Apple USB power adapter that was included with the iPad Mini. It outputs 2.1 Amps at 5V for four times the output of a standard USB 2.0 and over double a USB 3.0 port. This is much more practical means of charging the Astro3 compared to using a PC. When using the Apple power adapter, it took about three and a half hours to get it to full charge from roughly twenty percent capacity.

It should be noted that you cannot plug in a device to the charge ports while the battery itself is being charged. The circuitry only allows for power to flow in or out of the battery and charging its internal battery on the Astro3 takes precedence.

Charging Up A Device 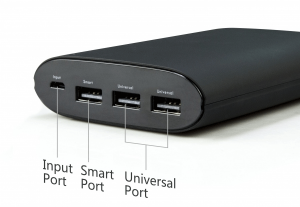 There are three output ports on the Astro3 device. The one closest to the micro-USB port is the Smart port that offers a device detecting feature that can also scale the power output up to 2.4Amps at 5V which is required for most tablets. This is the primary port you want to use for larger devices. The other two Universal ports have a lower output of roughly 1.5Amps. The total combined output of all three ports will not exceed 4Amps. This is important depending upon what you have plugged in the device at a given time. Thus, if you have an iPad and two phones attached, the Smart port may get 2.4A while the two Universal ports receive just 800mA. Thus, you can’t really charge three different tablets at the same time off the Astro3 but it can handle two high powered tablets. 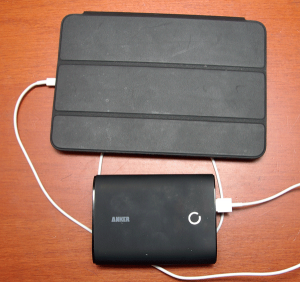 To test the Astro3, I drained my iPad Mini Retina down to just 10% battery life. I then plugged it into the Smart Port of the Astro3 and let it get fully charged to see how much capacity the display of the Astro3 claimed was left. The process took about four and a half hours to get the iPad back up to a full charge. The Astro3 at the end of this had a reported 20% battery life. This is a bit disappointing as the 12,000mAh capacity rating seems to imply that it should have twice as much capacity as an iPad Air battery but it is is much more closer to just being about the same size allowing for twice the running time.

The Astro3 12,000mAh battery is extremely easy to use and is especially helpful for anyone that needs extra power without a plug around to charge their device. Having said that, there is still room for improvement. For instance, you definitely do not want to get a lower capacity model if you will be using it with a tablet. As it stands, this battery pack will just over double your possible running time with a single tablet. Any smaller and you compromise the running times. The smaller versions should work well though if it is just being used with a smartphone.

It would be nice if Anker included a longer USB cable as the ten inch cable is rather short. They should also stress the importance of already having an USB power adapter as charging the battery via computer is essentially pointless. They do offer bundles with an AC power adapter and a 12V cart charger that add roughly $10. Note that no 30-pin or Lightning cables are included for use with Apple’s devices either.

Finally, there is the cost. The 12,000mAh version of the Astro3 is roughly $50. This isn’t a bad price but for the same price you can get the Anker Astro E5 with a 15,000mAh capacity rating that is roughly the same size but also features an LED flashlight built in. The downside is that it does only feature two ports with lower output ratings which is not as useful for those with many devices.