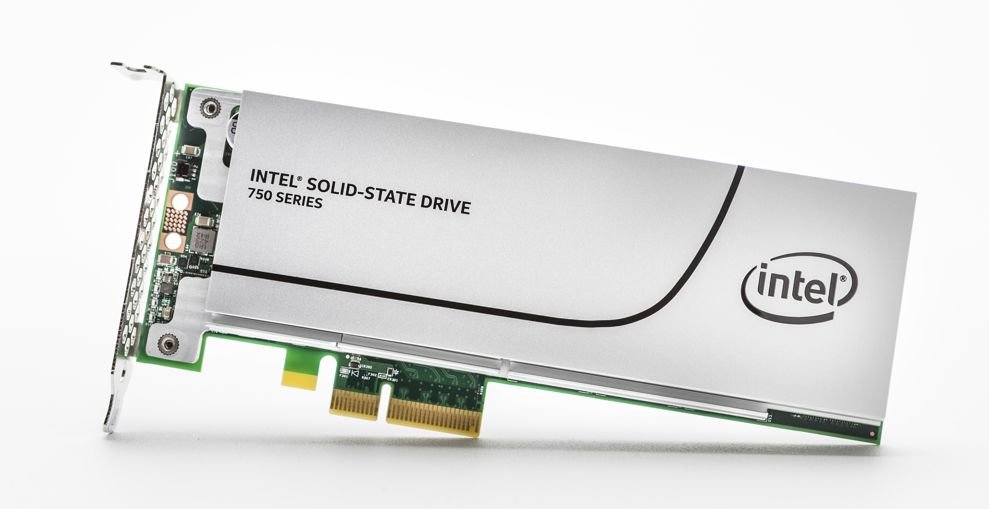 Back in the early days of consumer solid state drives, Intel was the king with its X-25M drive. It was fast, affordable and reliable. Over time though, other companies began producing faster drives. Eventually, Intel had to rely on third parties to produce the controllers for its SSDs to try and stay competitive. Now that is all about to change with the new Intel SSD 750 lineup of drives. The only problem is, you probably do not have a computer that can take advantage of all of its features.

The primary version of the Intel SSD 750 that consumers will buy is the PCI-Express card model. Rather than using the standard 2.5-inch drive format with a SATA interface, the PCIe card offers a higher bandwidth thanks to its PCI-Express 3.0 interface with 4 lanes. This gives it the ability to have up to upwards of 4GB/s transfer speeds. Now, there are M.2 class SSD drives on the market that can also utilize the same PCIe 3.0 with 4 lanes but they are generally more limited in the storage space because of their small size. The SSD 750 will be available in 400GB or 1.2TB sizes.

Now the reason for the PCIe card format has very much to do with the power requirements of the card. It draws a very high 20 watts of power which is much much higher than any M.2 card or even a 2.5-inch SDS drive format. The card also needs a fair amount of space to hold all the NAND chips for the 1.2TB capacity. Still, it is just a half height and half length card so it is not nearly as large as today’s graphics cards. Of course, most people buying this will not be using half height card slots and may need to get a different slot faceplate if Intel does not include one with the card version of the drive.

There is another problem though with the PCIe format and today’s current systems. Most consumer systems based on the Intel chipsets do not have the proper number of PCIe lanes available to provide the full bandwidth to the card. For instance, the Z97 chipset that most consumers use right now only provides PCIe 2.0 lanes to the non-graphics card slots. This effectively halves the bandwidth of the card at 2GB/s. If the consumer is using multiple graphics cards, they also may not have enough PCIe lanes to support the card without crippling the bandwidth to the graphics cards. Consumers who happen to have the Intel X99 based motherboards and the corresponding LGA2011-v3 processors are in luck as they provide sufficient PCIe lanes to get around this problem. 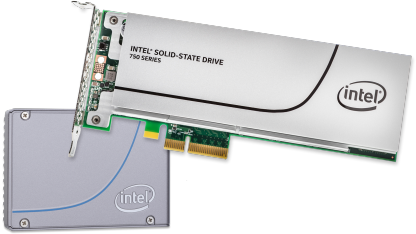 In addition to the PCIe card version, Intel is also release a special 2.5-inch drive version. Be aware this is a very thick (15mm) drive that will not fit into just about any existing laptop. This drive versions would obviously get around the problems with the PCIe card slots and lanes of many consumer desktops now. The problem is that the drive version does not utilize the standard SATA or SATA-Express interface connectors. Instead it uses a special SFF-8639 connector that is used in enterprise class storage systems. This was done for several reasons. First, the drive requires more power than the standard SATA power connectors would provide. Second, it provides the full bandwidth from four lanes similar to the PCIe card version. If they had used the existing SATA-Express, it would have been limited to two PCIe lanes or a maximum of 2GB/s with PCIe 3.0 support. It would be just 1GBs with PCIe 2.0.

This of course poses a problem for consumers as pretty much no consumer systems right now features the SFF-8639 connectors. Now there are a couple of companies that are starting to produce some X99 motherboards that will feature this connector but it is unlikely that many consumers would opt to replace their motherboard just to use the drive version rather than just picking up the PCIe card version.

The big feature of the Intel SSD 750 solid state drive is the use of NVMe instead of the traditional AHCI. I’ve spoken about this technology when I wrote about the M.2 SSD cards coming out as it presents a huge leap forward in storage technology. To put it in the most simple terms, NVMe allows for greater parallel processing of storage requests compared to the singular task nature of AHCI that was designed with hard drives in mind. This does present another problem for many current systems.

AHCI is extremely standardized such that it is supported by all of the modern operating systems and hardware. Consumers can pretty much buy any storage drive and just install it in their computer and it will be recognized and start working. NVMe has a few more requirements. First, the motherboard hardware needs to support the technology in order for a NVMe drive to be bootable. Even if your hardware does support it, it probably also needs to have NVMe drivers installed into operating system for the drive to function there. At least the software side won’t be as much of an issue because Windows 10 will be released with the drivers.

With the NVMe support and the PCIe interface, the Intel SSD 750 is clearly one of the fastest drives on the market. Intel rates the drive as having read speeds of up to 2.2GB/s and write speeds of 900MB/s. This is well beyond the 600MB/s maximum limit of the SATA interface. The drive also supports a greater number of IOPs than the average drive which is important with the NVMe support.

The only other drive on the market with performance as close as the SSD 750 is the which utilizes the M.2 interface with PCIe 3.0 4x. It still utilizes the AHCI standard instead of NVMe. In fact, depending upon your workload, the Samsung may actually end up being slightly faster than the SSD 750. The big difference is that the Samsung SM951 is more widely supported by current consumer computers than the SSD 750. Samsung is also working on a NVMe version of this SSD as well which could change things. Of course, finding the SM951 is difficult as it is sold primarily to system builders and not consumers.

So the Intel SSD 750 is clearly one of the fastest drives on the market that consumers can get. It also is quite reasonably priced at under $400 for the 400GB version which is what most consumers would consider purchasing. Sure, you can get standard SATA based SSDs in the terabyte range but the performance is not going to be anything like the SSD 750. The problem is that it is so forward thinking that most consumers won’t likely see any benefit with their existing computers. Instead, this is a drive that will most likely shine once Windows 10 comes out along with Intel’s next generation of processors and motherboards which is not going to happen until at least the second half or last quarter of 2015.