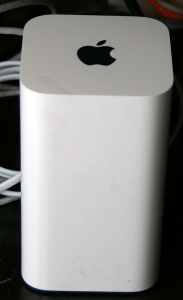 When Apple introduced their latest versions of their MacBook Air and MacBook Pro, one of the key features that they added was support for 5G Wi-Fi using the draft 802.11ac standards. This promises to improve network speeds and ranges. Of course to support the new wireless standard, you also need a compatible wireless router. Apple introduced its new Airport Express and Airport Extreme at the same time to fill that role. I have previously used both an AirPort Extreme and AirPort Express for my home network but had several dead zones within the house even with both devices. In addition, they lacked the range to reach an outbuilding office that I use as a library without a range extender. I recently picked up the new AirPort Extreme to see if it could solve my network coverage problems. 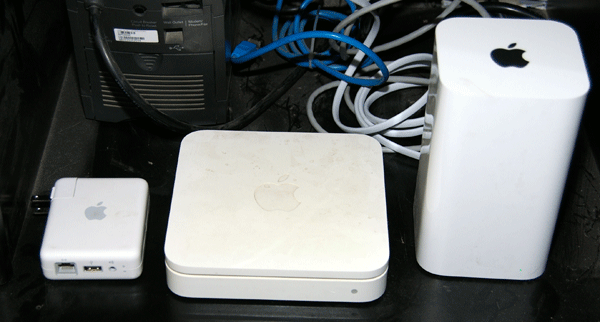 The AirPort Extreme went through a major redesign. This new tower design is essentially the same chassis that is also used for the Apple Time Machine product that can fit in a 3.5-inch hard drive for backing up your Apple computers. (Note: While there is a cavity to fit a drive into the AirPort Extreme, it does not have the interface to connect the drive.) The past design was a flat white box that was a bit smaller than the current Mac Mini computers. This means that it is a bit more conspicuous if the network router will be visible. Of course the tower design does have its benefits as well.

The previous AirPort Extreme devices relied on four antennae, two for the 2.4 GHz range and two of the 5 GHz range. With the added space, Apple was able to add two more antennae making it three for each of the bands. This should definitely improve the overall coverage area and can theoretically improve the bandwidth when transmitting across multiple channels via MIMO. The tall design also allows the antennae to be positioned higher up from any surface that the AirPort Extreme may be sitting on which could help cut down on interference.

The AirPort Extreme can also function as a wired switch in addition to providing wireless thanks to the three gigabit Ethernet ports provided on the LAN segment. This is one of the major physical differences between it and the AirPort Express. There is also a gigabit Ethernet WAN port for connecting to you broadband but most will not require such a fast speed. Finally, there is a single USB 2.0 port that can be used to connect either a printer or an external hard drive for sharing on the network.

In terms of setting up the AirPort Extreme, it is either going to be extremely easy or very difficult. Much of that depends upon what platform or software your device is running on. Configuration via an Apple computer with Mac OS X or an iOS device is extremely simple. Just go to the appropriate App store and download the AirPort Utility. Once installed, open up the program and it will automatically detect available devices for configuration.

Since I was replacing an older AirPort Extreme in my network, configuration was a breeze. Once I connected to the new tower version, it asked my if this was a new or replacement device. I selected replacement and then it asked which existing Apple wireless network I was replacing. After selecting the network, it automatically copied over the configuration from the old device to the new one, disabled the old one and brought up the new AirPort Extreme. It was up and running in less than five minutes total. 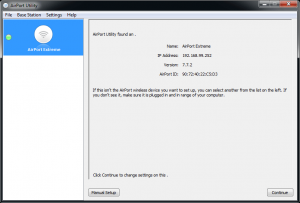 Now I mentioned that it could be extremely difficult to setup as well. This is the case if you are using any non-Apple device to attempt to setup the AirPort. Many wireless routers offer a built in web interface to help make configuration regardless of connecting device quite easy but that is not an option with the AirPort products. There is a utility for Windows users just like there is for Mac that can be downloaded from Apple but it is very difficult to find. You need to search for the AirPort Utility for Windows. The current version of the software is which is a good deal behind the 6.3 version available for Mac but it does work. Linux users will need to find a compatible third party application that uses the SNMP interface to properly configure the device. You might try looking at as a starting point.

Sadly I do not have any 802.11ac hardware to test the relatively performance of the new wireless standard. Instead, I have to rely on my 802.11n compatible devices to test the speeds and range. My home was built almost 80 years ago and has some unusual construction that includes very thick wood walls and plaster, both of which created wireless dead zones in the past. With the new Airport Extreme, I was able to get full wireless coverage in these zones. In addition, I saw improved signal strength in all the remaining portions of the house. In addition to this, I now was able to receive wireless in my outbuilding without the need for an extender.

Overall, I was very pleased with the product in terms of the coverage and signal strength. Web pages did not seem any faster than before but this was of course limited by my cable providers roughly 6Mbps maximum bandwidth. Transferring files between machines seemed to be on par with my old 802.11n AirPort Extreme for those areas where I did have coverage. So there is no apparent benefit as far as speed goes with existing 802.11n compatible wireless devices.

Apple’s new AirPort Extreme was a wise investment when it came to my home network. It essentially was able to replace several previous wireless networking devices that simplified my network setup. The range and coverage from the new design is certainly beneficial. I can’t say where there are any speed benefits but it certainly does not hurt to get the 5G support in the device for future wireless devices I may bring into the network.

The price is a bit of a turn off and frankly, I didn’t buy it at the list $199. Instead, it was purchase during the Black Friday sale that included a $50 gift card that I will be able to use for other accessories that I might need in the future. It is possible to purchase a for just $169 via Apple. It carries the same one-year warranty as if the product were new.