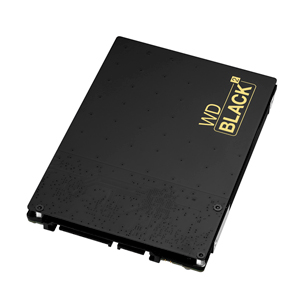 Hybrid hard drives have been on the market for a while. The are basically a standard hard drive that feature a small amount of SSD built onto the drive for caching purposes. They offer a slight boost in performance but their cache size limits their ability to offer as high of performance as a full SSD. Western Digital is looking to solve this with their new Black2 dual drive. Rather than just an SSD as a cache, it incorporates a full 120GB SSD drive with a 1TB hard drive in a single 2.5-inch drive that is only 9mm high. This sounds like the perfect solution for those that want to upgrade a laptop that only has space for a single drive to SSD performance without sacrificing storage space. There are a few catches though.

First off, the drive currently only works with the Windows operating systems. Specifically, Windows 7 and higher plus the 32-bit version of XP. Mac OS X and Linux users are out of luck. The reason is that the two drives reside on a single SATA interface. Installing a drive onto any system will give the system access to the 120GB SSD but the hard drive portion remains unseen until the Western Digital software is installed. Hopefully there will be software to correct this with other operating systems. When I first read about this drive, I was hoping it could be an option to replace an old MacBook Pro 15 hard drive.

This one is actually pretty obvious for anyone familiar with setting up a RAID array. A RAID setup functions best when you have identical drives in the system. The problem with the Black2 is that it is a hardware workaround to put two drives into a single SATA controller. Since this isn’t standard, RAID controllers have difficulty in properly seeing the drives so that they can function with the parallel read and write functions.

Some people like to setup a computer so that they can boot into multiple operating systems. This may be to run a combination of Windows and Linux, Mac OSX and Windows or just about any combination of the three. Since the software only supports Windows to access the hard drive, having a multi-boot configuration will not work as the software to fully access the drive is Windows only.

In order to use the Western Digital Black2 drive in a laptop, it is necessary to either do a fresh installation of Windows which many people do not have a copy of with their machine or to clone the drive. Thankfully, the kit includes the necessary tools in order to clone the drive. This includes a USB to SATA cable and a USB software key. The cable is plugged into two USB ports and the Black2 so that it is visible to the system. Users than can clone their existing hard drive onto the Black2 with a supplied copy of Acronis True Image. The downside here is that the SSD only has 120GB of space so if you existing hard drive is larger than this, you might have to do some extra work.

Pricing is also a concern with the Black2. Pricing for the drive is around $300. It is now possible to find some high capacity SSD drives around 400 to 500GB in capacity at this price point that will work with just about any system which provides high performance for all the data and with a capacity amount many people can use. Similarly, if they can fit two drives such as an mSATA SSD drive and a traditional hard drive it is cheaper to get the two separately. 120GB SSDs cost around $80 to $130 while a 1TB hard drive costs around $80 to $100. That makes the two drives a more affordable option.

I have not personally had a change to work with the Black2 drive yet. Several hardware sites on the internet did get a chance to play with them. You can read more details about the performance and setup of the drive at these sites: