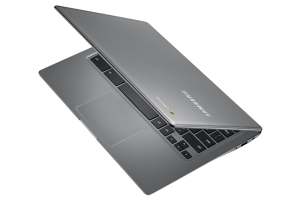 One of the big complaints that I have about most of the Chromebooks on the market right now is their displays. A screen resolution of 1366×768 is just too low in this day and age. Frankly, this is a problem with all low cost laptops that I have complained about in the past. Finally it looks like someone is listening as the larger of Samsung’s new Chromebook 2 laptops comes with a 1920×1080 display. With a price tag of just $400 it is certainly much more affordable than the which was priced like a premium ultrabook. Of course most people are commenting on the faux leather finish of it but the screen is much more important in my opinion. Find out more about Samsung’s latest Chromebook offerings. 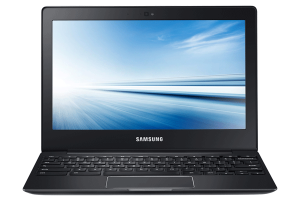 For their latest round of Chromebooks, Samsung offers two different models, an 11-inch and the 13.3-inch. The base components of the systems are very similar as their are powered by the Samsung Exynos 5 Octo or eight core ARM based processor. This is twice the cores of their . The memory for the processors has also been increased from 2GB to 4GB. Hopefully this has improved the responsiveness of the systems as this was one of the things that held back Samsung’s Chromebooks compared to the Intel based models.

In addition to the new processor, Samsung is also touting on increased battery life for the new Chromebook 2 models. The 11-inch model should receive up to 8-hours while the larger 13-inch model gets an extra half hour to 8.5-hours which should provide all day computing. 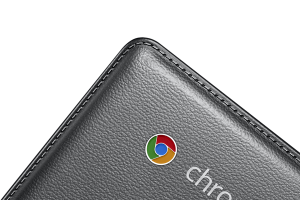 As I mentioned before though, it is the display that is the key feature to the latest Chromebooks. The 11.6-inch models keeps the typical 1366×768 resolution which is disappointing but not surprising as it is meant to be affordable with a list price of $320. The 13.3-inch model is the first to feature a 1920×1080 display that is capable of full 1080p HD video playback. This is significant as it produces a screen that is better suited for video streaming as well as multitasking in the Chrome OS. Of course, it does cost more with a list price of $400, but the cost will likely be worth it.

Both Chromebooks will be available in April and hopefully there will be some more details on the performance of the new models before their launch.