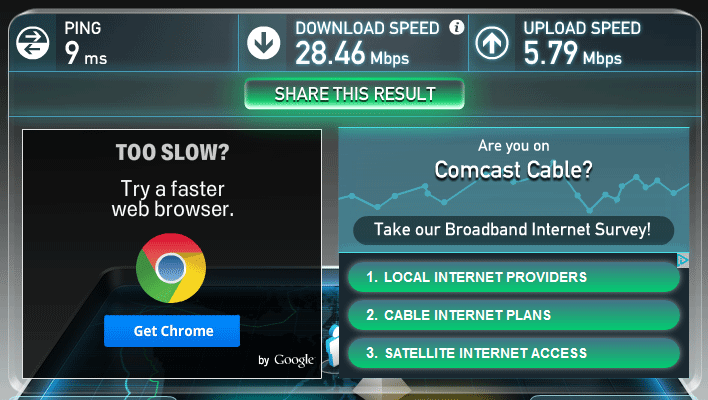 The other day I was driving in my car and listening to the radio when an advertisement from Comcast came on. It was talking about how their super fast XFinity Internet bundles with extra speed provides an advantage for gamers. I found this advertisement interesting because it was emphasizing the speed of their connection. In essence, the faster (and more expensive) internet bundle would be better for PC gaming then their standard version. Sadly, this is not necessarily the case. There is more to an internet connection than just speed. So let’s learn a bit about how and why speed do and don’t matter on your internet connections.

When you see advertisements for an internet connection, they will often have statements of something like “speeds up to 10Mbps”. What they are actually referring to is the bandwidth of the connection. For instance, where I live, Comcast offers three tiers of service: 3Mbps, 25Mbps and 50Mbps. This speed can determine the greatest amount of data that I can pull down to my system at a given time. Often, the speeds will be less than that due to other factors. In addition, upload speeds are often less than the download speeds when you are looking at home broadband connections. The same three offerings come with .7Mbps, 5Mbps and 10Mbps upload speeds respectively.

So this is the maximum speed that your connection can receive at a give time. Most of the time, you will not be receiving that much data because any item that you are downloading to your computer will be limited to the lowest bandwidth along the entire internet route between the server and the computer. So, if you happen to get a link between you and the server of just 1Mbps, having the 50MBps link is not going to be any faster than the 3Mpbs link. If this is the case, then why buy the more expensive links?

The reason has more to do with what you download and how much of it than anything else. For instance, if you stream video that is one of the most bandwidth intensive applications on the internet, you will likely need to have a faster link. An article on gives some examples of how much bandwidth you need for some popular streaming sites. A single SD (480p) video stream averaged about 1-2Mbps while a 1080p stream was anywhere from 3 to 10Mps. Netflix stated that their new 4K streaming takes twice as much bandwidth requiring up to 12Mbps. Now imagine that you have multiple people in your household are streaming at once. Three people watching 1080p video at once could top 30Mbps resulting in pauses in the streams or degraded quality.

The speed test image at the top of this post displays the speeds of my link but also shows something called PING. This is a simple test that records the latency or amount of time that it takes a packet of information to go from your computer out to a server and back. It is typically measured in milliseconds or ms. The lower the number, the less latency you have in that connection. Another way that many people think of it is lag. Lag is essentially the opposite as the higher the number, the greater the lag is in your connection.

So why does latency matter? For some things it does not. Take video streaming. Whether the stream takes two seconds to start or two tenths of a second isn’t going to matter that much. Once the stream is going, if it does not encounter any buffering the experience in the same. But let’s got back to that ad I mentioned at the beginning.

In the ad, Comcast was claiming that the faster connection would give gamers an advantage over a slower package. In essence, having 50Mbps means you would play better than 3Mbps. The problem is that action games like first person shooters are much more dependent upon latency than bandwidth. In fact, most online games actually use very little bandwidth compared to a video stream. In fact, the 3Mbps link will probably play just as fine as the 50Mbps speed unless the game uses a lot of bandwidth. It certainly is not going to be a factor between the 25Mbps and 50Mbps options.

Instead it is the latency of the connection that matters more. If one connection has 50ms ping to the server and another 150ms ping, then the 50ms has a tenth of a second advantage in terms of reacting than the person with 150ms latency. The thing is that the way a cable internet loop works, your latency will be roughly the same because you are going over the same line whether it is 3Mbps or 50Mbps. The only difference is how much data can traverse that link. Sure, the 50Mbps means that you will download games from service like Steam or Origin faster as well as patches, but in terms of game performance it probably won’t.

The one way that Comcast’s faster link package could be better is if they give you a different type of hardware that offers a lower level of latency. For instance, a wireless cable modem with better Wi-Fi latency could make a small impact but most online game performance is more dependent upon the links outside of the home and over the internet such that it would be almost insignificant to the overall latency.

So Is Faster Speed Better?

The point of this article was basically to say that you have to beware of what a company’s marketing is trying to tell you. Yes, in general a higher speed broadband internet connection offers a better experience but as a consumer you also don’t want to have to overspend for your experience. Be sure to look at how you use your internet connection to get what is best for your needs. Don’t do it just because they claim something is better when it may really not be.