Eighteen months is a very long time in the world of graphics cards. This is roughly how long the venerable GeForce GTX 750 Ti from NVIDIA has been on the market. When the card was released, it offered an amazing level of efficiency with the new Maxwell architecture and just enough performance for those wanting to play games at 1080p resolutions. Since then, NVIDIA has pretty much ignored the sub-$200 graphics card market allowing AMD to push out a variety of cards that offered superior performance at roughly the same cost even if they were not as efficient. Now NVIDIA is taking the newer 900 series cards and releasing a new GeForce GTX 950 to fill in the gap between the older GTX 750 Ti and the still over $200 GTX 960. PC gamers on a budget will definitely want to take a look at it.

While there is a drive by some to push for 4K resolutions with games, the majority of users are still at the 1920×1080 resolutions and lower. It is still the most common resolution for desktop displays and what is used by the majority of HDTVs. As a result, the focus for the GeForce GTX 950 was to improve the performance for users at this resolution. When the GTX 750 Ti was released, it was able to run up to this resolution without much of an issue. It still struggles to provide high frame rates with great detail levels though. That is why AMD’s products started to outperform it.

In terms of performance, the card gets roughly a thirty to fifty percent improvement in the frame rates for games over the older GTX 750 Ti at the 1920×1080 resolutions. This means that more games were able to reach the ideal 60 frames per second to get the smoothest image possible. Filtering is still somewhat limited by the 2GB of memory which means you won’t be using anti-aliasing on all titles. Against the Radeon R7 370 which is AMD’s closest graphics processor, the NVIDIA card comes out ahead most of the time by a five to ten percent margin. 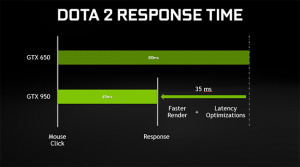 One bit a marketing that one needs to be wary of is the claims by NVIDIA about the GeForce GTX 950 and MOBA games like DOTA 2 and Heroes of the Storm. In essence, NVIDIA claims that the new graphics card can improve the response time within the game giving players an edge over other graphics cards. For instance, NVIDIA claims a drop from 80ms to 45 ms in DOTA2. The issue is the graphics cards they are using for the comparison. The GTX 650 graphics card is extremely dated and the frame rate performance between it and the GTX 950 is not even something to really talk about. It would have been better if NVIDIA used a GTX 750Ti or even a GTX 960 to really show what difference their optimizations produced. Since the card uses the same Maxwell 2 architecture as many of the other 900 series cards, they will likely get the same “enhancements” that the GTX 950 has. In other words, don’t buy this card just for this claim until users are able to do more real world testing of the claims aginst other modern graphics cards.

At the time of launch, no official products were available to consumers which is disappointing. The official price point for the NVIDIA GeForce GTX 950 is $159. This puts it slightly more expensive than the Radeon R7 370 which averages around $150 but much more affordable than the GeForce GTX 960 that is still over $200. NVIDIA does not look to have shifted the pricing on any of the higher end 900 series cards. The GTX 750 Ti has been pushed lower to roughly $120 but frankly it is worth spending extra for the GTX 950 especially if you are playing PC games on a 1920×1080 monitor. Hopefully new products will reach market in the coming weeks.