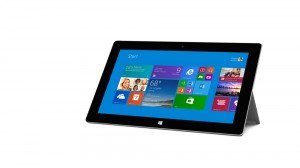 Microsoft’s first attempt at producing their own branded tablet computer was less than a success. The Surface With Windows RT never caught on with consumers and ended up costing the company a lot of money in write downs from unsold inventory. The device itself was actually quite well built and even offered long running times. The problem was that the system was based around the ARM processors used by all the other tablets and as a result, needed a new Windows RT operating system. It looked like Windows 8 but it would not run the same applications that you used with your traditional PC.

Today, Microsoft announced its second generation of tablets to be available for preorder beginning tomorrow (September 24th) and availability to start on October 22nd. Let’s take a closer look at some of the things that Microsoft has changed to the tablet to help improve it and see if this is something consumers should consider this time around… 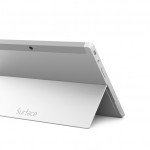 The Surface 2 tablet looks very similar to the previous model but there are a number of changes to the design. The biggest change is the kickstand which is still built into the case but now features two angle settings over the previous one. This is extremely useful when the tablet is used at a lower level than a traditional desk such as one’s lap. In addition, the extra adjustment can be extremely useful if you are in a space that has a lot of glare.

Someone less tangible is the size and weight. The Surface 2 tablet has been slimmed down by a fraction to just .35-inches thick compared to the past .4-inches. The weight has dropped from 1.5 pounds to just under 1.49 pounds. These aren’t going to be very obvious but it is nice to see Microsoft trying to get these lower to improve the portability.

The USB port has been upgraded from the previous 2.0 to the new USB 3.0. This allows for a greater support of external peripherals at higher speeds. In particular, high speed external storage now is much better than it was. The port could also conceivably be used with a third party device that could expand the types of ports used with the tablet.

The original Surface tablet featured a fairly typical 1366×768 display resolution that would be found in many budget systems. It was a decent screen, just not as high of resolution as say an iPad with its Retina display that could be purchased for roughly the same price. The Surface Pro launched with a higher resolution screen which was one reason many people may have opted to go for the more expensive tablet.

Now Microsoft has decided to give the Surface 2 the same 1920×1080 resolution display that is going to be found in the Surface Pro 2. This means that the tablet can natively support 1080p high definition video and have more display space for applications than before.

Like the previous Surface, the Surface 2 is going to be powered by an NVIDIA Tegra processor. The past one was the Tegra 3 while this one received the Tegra 4 which first launched in the NVIDIA Shield, an Android gaming device. It certainly offers greater performance than the past processor but it is still an ARM based architecture. This means that the Surface 2 still has to run the Windows RT software that so many people do not want. After all, why have a tablet that looks like it runs the full Windows 8 by having the same interface when buyers won’t be able to install the same software as from their laptop or desktop computers?

In addition to the new tablets, Microsoft is also launching a new lineup of improved accessories. The Touch Cover and Type Cover keyboards look essentially the same but are slightly thinner than last years versions. In addition, the Type Cover features a backlight for the keyboard. For those that want to use these two peripherals without having them attached to the tablet, the company is also planning on releasing a new Bluetooth adapter that will slide onto the cover connector of the peripherals to provide power and Bluetooth transmitter to use with the Surface tablets.

Pricing for the new Surface 2 has dropped to just $449 from the previous $499. This is likely to help try and boost sales as it is no less expensive than the iPad but still on the premium side compared to Android tablets.

It is really nice to see that Microsoft is offering some major upgrades to the Surface 2 tablet but it left in its fatal flaw of the Windows RT software. With the recent release of the Intel Bay Trail processors that were designed to try and bring more affordable but completely compatible x86 versions of Windows 8, it is surprising that Microsoft decided to continue to use the same operating system that most of its hardware partners like ASUS and Acer have avoided due to lack of demand. I for one would would certainly recommend against this tablet in favor of other affordable options that offer full OS compatibility.