Catan Board Game and Catan HD on iPad

Getting together with family or a group of friends to play some games is a great way to socialize and have some fun, unless you may be playing a game like Illuminati. It also helps to stimulate ones mind in the strategy of winning. With the increasing reliance on digital technology and people constantly trying to stay connected, finding the time to play a board game might be difficult and buying new games to try out can be quite costly. As tablets become more popular especially for entertainment, many popular board games are now being converted to digital applications. This is opening up a whole new realm of playing games that for many can actually be better than playing those physical games.

So will your next board game end up being a digital one rather than a physical one? Lets look at some of the ways that digital board games may be better than the traditional way…

Let’s get the first and biggest reason why digital board games on tablets are better than traditional board games. I’m going to look at some common board games and show you the breakdown of costs for them and then show how much those same games cost for the digital versions via the iTunes store for an iPad. 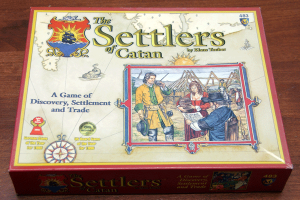 Let’s start with a rather expensive but very popular board game, Catan. Now the game has its base set priced at $42 which includes the base tiles, game pieces, cards, dice and of course rules. Now there are a number of expansion available for the board game as well including Seafarers of Catan and Cities and Knights. Each of these is also priced at $42. So, if you wanted to have the game plus the two expansions that would cost $126. If you are lucky, you can find deals such as through Amazon and that total might drop down to $114 but still not much. 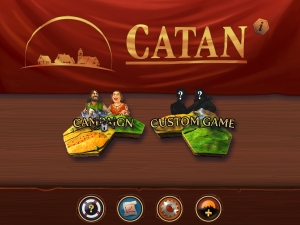 Catan HD has been available for some time for the iPad. The game allows for one to four players to play via the tablet with AI players filling in any empty spots necessary for the three to four players required to play. As a result, it can be used as a replacement for the traditional board game between friends by passing the tablet between players on their turns. The best part is it costs just $4.99! That’s is almost one tenth the price of the physical board game. It also has in-app purchases to add in the Seafarers and Cities and Knights expansions which are $4.99 each. So for $15 you can get digital versions of the same game plus two expansions.

Here is a short table of some of the games and their price for the physical game versus the digital option available on iTunes:

In each instance, the savings for buying a digital version is much more affordable such that all of the games combined is less expensive than a single copy of the most expensive physical game. 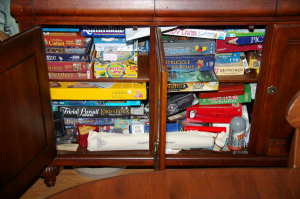 Many Board Games Taking Up a Cabinet

As a person who has played a fair number of board games over the years, I have amassed quite a collection of games that have to be stored. The picture above is just of those that I have sitting in one of the dining room cabinets so they are accessible. There are also a number of boxes full of games that are stored out in my storage shed that contain a variety of games that I don’t play very often. Anyone who likes games is probably face with similar situations of full shelves, cabinets, closets and boxes around their home. Digital games remove all that from being a problem by instead just taking up some space on your device. Even with limited space on a tablet, you can also just remove one temporarily and then download it again from the cloud (if purchased via a service like iTunes) or loaded from a PC that stores your purchased apps. 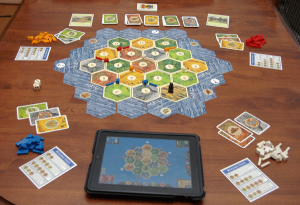 There is another aspect to digital games as well involving space and that has to do with the room required to play a game. There are a number of games out on the market that require a fair amount of table space just to play the game. It could be filled with boards, game pieces, cards, etc. for the iPad and included a great picture in it of how much table space is required to play the game with four players. Digital versions such as this take complex setups and turn them into convenient digital screens to help better organize the game which in turns means that it can be played with via little to no table space. The downside here is that it might not be as easy to see what your opponents may be up to. 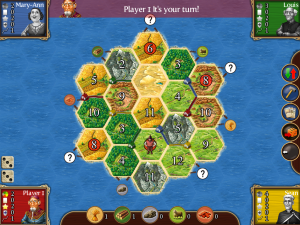 Game Board in Catan HD for iPad 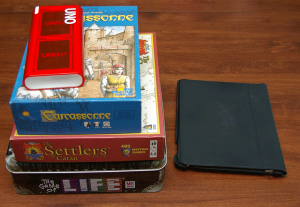 Game Boxes Next to an iPad

Ever gone on a camping trip or road trip where you brought along some games to pass the time? Having the games on a tablet can make bringing them much more convenient. This is especially true if you have limited space such as having to travel by air and you don’t necessarily want to pack extra bags with their extra fees. This is where having the games on the tablet can be extremely useful. For many people, they already plan to bring their tablet to watch movies, read books or just stay connected and having a few games available to play is just another bonus.

All of the official digital board games are designed such that they can be played against computer players. This is a great addition and something that one can’t really do with a physical board game. This is great for anyone that has to travel frequently, has to keep kids entertained at functions they may not be interested in or just a diversion for when you have spare time but no one around to play the game with. 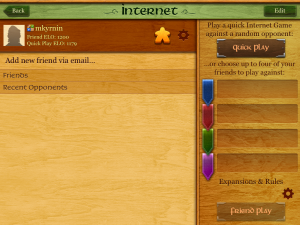 Some of the digital board games have the ability to be played with others over a network. This could be a local network so that each individual who has a tablet device can see their own hand but the best are when it also allows play over the internet between two or more individuals in remote locations. This can be a great option for including people in your game that might be traveling, live in a different region or just can’t get together in one location to play. It can also be used to play random players for a bit more diversity in opponents.

Even with all these reasons why digital board games are great, there are instances where a physical game may still be preferred…

Part of the experience of a board game is the fact that you pick up and roll the dice, move your game piece around the board or just happen to have the most cards or cash in your hand. All of these are tactile experiences you get when you play a board game. Rolling dice in a digital game usually just involves touching the screen, maybe swiping or shaking the tablet at times. That just doesn’t have the same feel. Game pieces, cards and cash are all handled by the computer program for the most part.

Pretty much all digital board games are designed so that they can be played on your own. This is great if you want to practice to get better at a game or just can’t get together with friends frequently to play the games. The downside is that there isn’t that same social connection that the physical board games provide. You do get that if you happen to use the digital game on a tablet as a substitute for a physical box game but with games that do have remote play over the internet, you will still be playing the game with the other players but won’t have the banter, trash talking or joking that you might have while sitting around a table.

By the nature of their programming, digital board games have very strict rules. This is often contrary to how many people in social settings may end up playing games. This can play out in two ways.

One of the most frustrating aspects of tablets and the touchscreens is the accidental touch on the wrong part of the screen. Well, in a game you might accidentally press the end turn icon rather than another which results in a skip that can’t be undone. This is not something that one would likely do in a physical board game.

With many games, people who play a game regularly may use variations of the rules that they have agreed upon. Now with a digital game, there may be some variation of the rules programmed but what if you have a mutually agreed upon variation that isn’t in the programming. There is no way to work around that and you are stuck with whatever rules were put into the game. This can result in some frustration for some people who do not necessarily like the standard rules of a game.

Digital board games are a great way for people on a tight budget, with limited space or just not able to get together with friends and family to play a game frequently. While they will function the same as a traditional board game, they can’t quite completely replace the social experience one has with a traditional game. I personally will likely be moving more and more of my board games over to digital but there are still some that I really want to have that physical and social interaction that the digital versions can’t fully emulate.