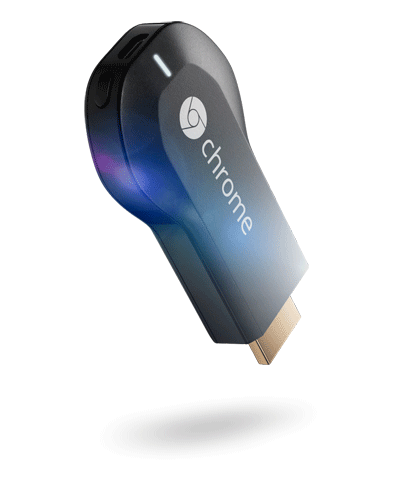 Google announced its media extender just last week and the device has been selling like mad. Much of this was probably from the very low $35 price tag and the initial offer for a three month trial of Netflix that was pulled in less than 24 hours after it went on sale. Even though it may be extremely affordable, I’m not intending to get one right away and I think consumers should do the same.

It is Not Wireless HDMI

Most people upon seeing the device assume that it is a wireless HDMI device. Essentially you plug it into your HDTV and then can send any video signal to that television. While it does plug into the HDMI port on your TV or monitor, it does not connect with any other HDMI device. Instead, it takes streaming video over the internet and converts it to the television. This means that it only works with those services and devices that are capable of sending a compatible video encoded stream to the device. There is not another wireless dongle that plugs into say your Blu-ray player, computer video card, game console or other home electronics device that can then transmit to it. (Maybe Google should consider this as a potential followup product or functionality they can sell to other home electronics makers.)

The Chromecast dongle on its own does not automatically make your HDTV a smart television. This is because it does not have a complete operating system with interface that can be manipulated by the user say like the or does. Instead, the user must have a smartphone, tablet or computer system with Chromecast compatible applications. If you don’t have any of these, you will not be able to use the dongle at all. Effectively, you must find the stream that you wish to send to the Chromecast via a device and application. This effectively ties your TV to another device. While it is nice to not have the wires, many people may already have the ability to plug in their tablet or computer to the TV and simply don’t require the dongle.

Its All About Video Streaming

One of the great advantages that provides is the ability to streaming video or audio to compatible devices. There are a large number of available Airplay compatible devices that allow you to extend your iTunes library to stream to say a home stereo system or wireless speakers. As it stands right now, Chromecast is solely designed with video services in mind. Why not allow the device to also stream music from a computer, tablet or smartphone as well.

This is probably the biggest problem with the Chromecast in its current form. Since it is a wireless dongle that can theoretically receive streams, it would be great to be able to say take something that you have, be it video or audio files, and stream it to the Chromecast and your HDTV or home theater setup. It is somewhat possible but only in a round about way. Essentially, the current Chrome browsers on PCs can be used to take anything that exists in a tab on the browser and stream that in a mirrored mode to the Chromecast. That means if you can view the file in Chrome, you can theoretically send it to the TV in this mirrored mode.

There are many drawback to this existing feature. First, there is a maximum output ability of just 720p meaning that it will not display full 1080p high definition output which it can when using the stream services of Google Play, Netflix or YouTube. Second, your computer will have to take this information and encode it into a video stream. This takes valuable CPU time which can drain down device batteries if they are not plugged in plus it also introduces a delay into the stream making it less responsive. Finally, if the computer or wireless network has issues, it will cause frame drops or video quality issues from time to time.

It Will Get Better

Having said all of these things about Google’s Chromecast, it is going to get better. Thankfully Google has release its so that companies can start integrating the streaming features into their applications. This may mean that eventually additional steaming services such as Pandora, Spotify, Vimeo or Hulu may start building their applications with the Chromecast in mind. Of course there are still many legal hurdles that some of these companies may face in terms of being able to use the service because of agreements with content owners.

Of course the best function would be the ability to let any device encode media that they have stored in a local file systtem to the Chromecast device. There are already a number of media streaming networked attached storage devices. If such devices could natively tie into the Chromecast, it would be a superb function that would win over many consumers.

Hold Off For Now

While $35 is certainly not much for many consumers to play around with the device, it would seem much better to hold off on purchasing one to see what other features may get added to the device. Sometimes being the early adopter is not always the best. After all, the Nexus Q was Google’s first foray into such a device but was pulled from market so fast hardly anyone even had the chance to use one. Of course it has sold so well that if you have not already ordered one, you will have to wait about a month before more supplies become available.