Last week, Sony released their PlayStation 4 game console and this week Microsoft will be countering with their Xbox One. It is no surprise that the companies release them just before the busy holiday season so as to maximize the hype for them and the pressure on parents to buy one for their kids. Of course these consoles are not cheap with the PS4 base systems costing $400 and the Xbox One at $500 without any games or extra controllers. With supply issues always a possibility and the high prices of the consoles, it isn’t likely that many people will be buying both consoles. So if you can only get one, which of the two should you get?

Both of the new consoles are essentially specialized PC computer hardware. Why is this? Well, each of the companies decided to use a processor designed by AMD that uses the x86 instructions just like your standard desktop computer system. In fact, the systems are extremely similar when you look at the primary hardware. Both run an eight core AMD processor with an AMD Radeon Graphics Core Next graphics processor.

Now there are differences between the two. For instance, the Xbox One looks to run at a slightly higher clock speed for the processor and graphics. The PlayStation 4 on the other hand offers more shader units in its graphics processor and faster GDDR5 memory. The net result is that hardware wise, the PlayStation has a bit more graphics capabilities but they are nearly identical for the most part that buyers probably will have a hard time looking at the same title running side by side on the two consoles.

The subtleties are in the peripherals for the systems. Most notable are the storage and the camera functions. Both the PS4 and Xbox One have internal hard drives for storing games and data. Both use 500GB hard drives. The differences are in how they can be expanded. Sony allows the internal hard drive to be replaced quite easily by the user for a higher performance or high storage capacity. On the other hand, Microsoft does not allow the drive to be upgraded and instead allows for external storage to be connected via one of the USB 3.0 ports which Sony does not currently allow.

Microsoft is also bundling in their Kinect camera with the system. This is the primary reason that Xbox One costs $100 more than the PS4. It was also a big controversy as when it was first announced as Microsoft noted that the camera would always be on in order to allow for voice command to turn on the system. They have since backed off this stance primarily due to privacy concerns from European countries. Most people will only use the Kinect features for its voice controls as few games use the motion controls. Sony may not ship a camera controller with their system, but they do offer the Move for those that might want motion controls.

First off, both the PS4 and Xbox One are not backwards compatible. This means if you have games from the past versions of the PlayStation or Xbox consoles, you will not be able to play them on the console. The reason for this is primary because of the big change in the underlying hardware and the difficulty in producing reliable emulation. Still, this is something that the Wii U does offer compared to both of the new consoles.

In terms of the games for the launch of each of the consoles, nine of them can be found on each platform. Many of these are the big launch title games as well including Assassins Creed IV, Battlefield 4, Call of Duty Ghosts, Need For Speed Rivals and EA’s latest sports lineup of Madden, NBA Live and FIFA. Even kids games like Lego Marvel Superheroes and Skylanders Swap Force are both.

With so much overlap, especially at launch, there is less reason to lean towards one platform or the other. Microsoft has more big name titles with Dead Rising 3 and Forza Motosports 5 as being somewhat compelling options. On the other hand, Sony has a larger number of download only titles that are available that include the likes of Minecraft, DC Universe Online and Warframe.

Instead, it is the games that will be coming out in the next year that become much more compelling for picking one platform over the other. In particular, Microsoft has announced that Titanfall will only be available through the XBox or PC with no chance of it coming to the PS4. Of course Sony has its only exclusive in the next year that include Driveclub and Infamous: Second Son.

Streaming media to a console is nothing new. Pretty much every last generation console had this ability at least with Netflix and a couple other services. So it isn’t surprising the the new consoles also gain this ability. With the latest generation of consoles, these streaming abilities are increasing. In effect, there are more streaming services available for entertainment than before. Of course many of these service require a subscription from the service to view. There are some differences though.

For instance, all of the applications for streaming are available for download for free on the PlayStation 4. In contrast, users of the Xbox One will need to have a Xbox Live Gold membership in order to use the same applications. This makes the PS4 much more affordable if you want to use it for media streaming purposes. The difference is that more of the streaming media services are available for the Xbox One.

Of course, there is more than just streaming services as well. Microsoft in addition to having streaming also offers HDMI passthrough so that a cable or satellite TV receiver can have its content passed through the system. Why is this useful? Because Microsoft offers a OneGuide service that can essentially organize all your media watching into a single correlated list of what is playing on the channels. Think of it as a programmable smart guide.

Social media is a major feature in people’s lives these days. As a part of the new console push, there is an emphasis on sharing details and experiences. This has existing in some form before with friends lists and achievements that could be viewed but each console is looking to push this out even further. Instead of just achievements, now the game experience can be streamed out for others to watch.

Sony simplifies the streaming processor by including a share button directly on their controller. By pressing this, users can essentially live stream their gameplay on the console to either the Ustream or Twitch services for others to watch. Microsoft will also have the ability to broadcast through the Twitch services but will add additional abilities thanks to the Kinect which can also record commentary videos and even provides an editing platform on the box.

Currently, only the PS 4 has this feature working as Microsoft has announced that their streaming won’t be launched until early in 2014.

Ever since Nintendo released their Wii U last year with its remote gameplay function from its GamePad, there has been a push for the ability to access games and features of the console without using the TV that it is connected to. Both Sony and Microsoft has built some of these functions into their latest consoles. 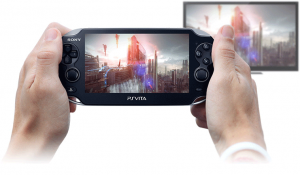 The Sony PlayStation 4 offers Remote Play. This function essentially allows gamers to play some of their games over a Wi-Fi connection between their PS4 and a PlayStation Vita. The function is nearly identical to what Nintendo created with its GamePad but the difference here is that the device required to use the feature is not included with the console. So if you want to play those games that are enabled with the Remote Play feature, you must spend around another $250 in order to get the Vita mobile gaming platform. 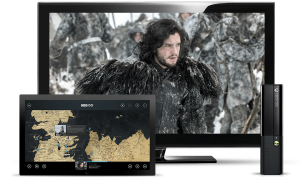 Microsoft is taking a bit different approach with their . The feature actually can be used with their previous XBox 360 console as well as the new one. The difference here is that your aren’t actually playing games typically found on your console. Instead, this is more of an extension to the media watching experience. To use it, you download the XBox One or XBox 360 SmartGlass application for Windows, Windows Phone, iOS or Android device and then connect it up to your console. Then when you are watching SmartGlass compatible media, you can receive additional information on the program, use it as a remote and even sometimes provide additional details for games. In essence, it provides a second screen experience similar to the Wii U in some of its games but it also applies out to TV or videos as well.

So Which Should You Get?

With the current hardware and games being so similar between the two systems, the desire for one or the other consoles really comes down to which do you think fits better with what you want to do with it. Right now, Microsoft has the edge when it comes to using the console for entertainment beyond games. It now has a Blu-ray player, more streaming services available, its second screen features and the OneGuide. The downside is that some of these will require an Xbox Live Gold subscription which adds extra cost. This is where the PlayStation 4 has an advantage. The system is $100 less than the XBox Live and many of the streaming entertainment can be used without the need for paying more money.

So, if you are buying one for yourself, pick whichever one you like. If you have a kid that is asking for a particular one, be sure to try and get it because while the two are almost interchangeable for the majority of the big name titles the child will have some disappointment with not getting what they wanted.