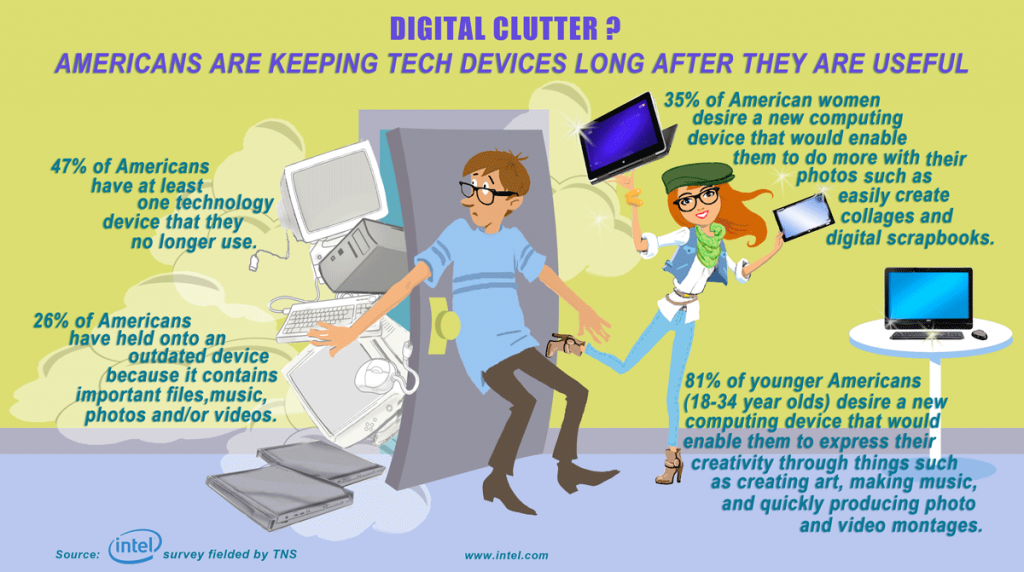 Computing devices sales have been very bad over the past couple of years. This is hurting many computer makers but it is also hurting the likes of Intel, the biggest supplier of processors to computers. So it isn’t that surprising that Intel’s marketing department would come out with a press release about how . The interesting thing is how they put the results with marketing spin to try and suggest that people need to upgrade their gear. Take me for instance, I am running a desktop computer that is over three years old. It is two generations behind when it comes to Intel’s desktop processors. Is this really holding me back?

Before looking at the conclusions and solutions from the survey, let’s pick apart the statements made in the infographic that Intel released with the survey and the accuracy of their statements:

This is not surprising at all. is not easy. I have several devices around my house that are outdated that I still have. Heck, there is a server I used years ago sitting out in my shed that I keep forgetting to get rid of. I have an eight year old digital SLR camera I keep as a backup in case my current one breaks. They aren’t used but is that holding me back in terms of my computing use? Nope. I bet the same can be said for most of the 47% who answered the survey.

26% of Americans have held onto an outdated device because it contains important files, music, photos and/or videos

This statement makes a bit more sense than the first. The problem here is less about the new technology and more about how users handle their data. After all, I have a second generation iPod Touch that has some data on it. The survey could claim me as part of that 27% because I have some important data (aka, grocery shopping lists) on it. I doubt that is what they are intending here. A better example is one of my Uncles who archived data onto Zip disks (remember those?) who has no way to access that data because he did not move the data to another location when he upgraded technology. So, this is more a user problem than a technological one. Cloud storage it making it easier for people to keep their files and move them between devices.

OK, lets move beyond the sexism in this statement and instead focus on the issue, easily creating collages and digital scrapbooks. This is more of a software issue than a hardware one. A five year old computer with the right software can do this. Heck, even a first generation iPad could do these tasks. Sure, newer devices might be able to do it quicker but its not the hardware that holds it back but the software. Get the right program and you can do it. The hardware only assists in achieving that.

81% of younger Americans (18-34 year olds) desire a new computing device that would enable them to express their creativity through things such as creating art, making music and video montages

Once again, I fail to see how our older devices are holding us back in this area. This is mostly a software issue and not a hardware one. The software to do all of these tasks has existed for years. Photoshop and other graphics software can be used to draw or edit photos. There are plenty of digital video editing programs, Heck, you can get music synthesizer programs that run on old handheld game consoles. Take any smartphone from the past couple years and you could conceivably do all these tasks. I’m guessing they got such a high response because the question was something like “Would you like a device that does all these things?”.

The basic premise of the results from Intel survey and press release seems to be that the newer technology is faster and therefore better at dealing with all of your technology problems. The flaw is this statement is that many of the things they referring to are not limited by the speed of the graphics or the processor but by other factors. For instance the survey makes this statement:

The speed of your computer is not going to impact how well you can organize your photos, videos or documents. In order for them to organized, the user must do input to generate that organization and that is going to take as long as you the user take to do it. A faster processor is not going to put tags or drag a file from one location to another. Sure, it may improve the speed or searching for those documents but it will not make it any faster on the user input level which is what most people don’t do that results in the clutter.

The same can be said for many tasks like creating a photo collage. The user still needs to take the time to find the photos and place them within a collage. The hardware to render that information does not take a lot of computing power. Thus, the speed is much more dependent upon the users interactions than on the CPU and graphics.

The only case where the computing power will make sense is when it comes to video, but even here other technologies can play an important role. Desktop video editing is one of the most complicated tasks that your average user will do. A faster processor and graphics will help improve the speed at which it can render effects onto that video. So, if you do lots of video, you are probably being held back by older technology but the question is how much are you being held back. My three year old i5-2500K quad core desktop does a pretty good job and upgrading may only save me a few minutes here and there for my video work. If you are looking at mobile devices, a three year old device might struggle heavily compared to one from today.

Going back to the 81% want to be creative, Intel’s survey document talks more about having the ability to share this content than create it. I’m not really sure how this translates into a technological problem. Once again, social media sites like Facebook, Deviant Art, Twitter, Instagram, etc allow for quickly sharing your art with others. Then there are the slew of apps available for computers, tablets and mobile phones for sharing and transferring.

The purpose of this statement was to hype Intel Wireless Display based upon the one in four wanting to be able to shared content to an HDTV wirelessly. This is a technology that has existed for several years in laptops but hasn’t really caught on. Essentially, it allows an Intel based device with compatible hardware to transmit its display to a HDTV screen, provided the HDTV has an Intel Wireless Display adapter built-in or attached to it.

Ironically, the most important aspect of updating to the most recent technology is saved for last in Intel’s survey document and left off of their infographic entirely. As we move to more and more mobile device usage, our ability to use those devices for an enite day without having to plug in frequently becomes more important. As battery technology has limited improvements in terms of the power capacity they can store, our devices need to become more efficient in order to run for longer times.

In fact, computing performance between many Intel processors today and similar models from several years ago has not changed much. This is why my Core i5-2500K desktop processor from three years ago serves me just fine and I have no reason to upgrade to the i5-4670K, its current equivalent. But then again, this is a desktop where efficiency is less important.

Now, if I had a first generation Ultrabook and compared it to a current generation model, the performance again may not be all that different when it comes to the processor. The graphics have certainly improved dramatically but it is the battery life that is key here. A newer Ultrabook can have between 25% to 75% longer running time when compared to one from several years ago. Much the same can be said for tablets. So if battery life is important, upgrading may be quite important, but it certainly isn’t holding you back in terms of what you can do.