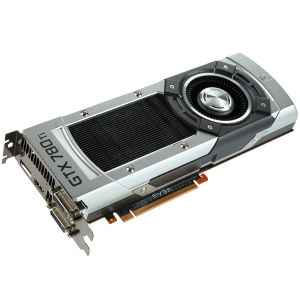 NVIDIA originally announced their GeForce GTX 780 Ti graphics card back in mid-October at their “The Way It’s Meant To Be Played” event that emphasized a lot of other tech features. This was basically a week after the initial announcement of the NVIDIA Radeon R9 series cards but still two weeks before the initial launch of the R9 290X. It was clear that the card was going to be a response to the AMD offerings but there was no idea what the performance or pricing would be like. Now the cards have been released and they basically take over the price point once held by the GTX 780 but still more expensive than the new AMD R9 290X. Based on this pricing, the card has to be better but the question is just how much better?

For most buyers, the one thing they care about the most is the speed of the graphics. The new GeForce GTX 780 Ti certainly takes that lead back from the Radeon R9 290X. This is achieved not through a new design as it uses the same GK110 design as the TITAN and GTX 780. The difference is that it has more more stream processors, texture units and faster clock speeds than either of those. The result in an almost twenty percent performance increase over the previous GTX 780 but more importantly roughly ten percent faster than either the TITAN or the Radeon R9 290X.

This makes the GeForce GTX 780 Ti the fastest single card on the market and one that is most capable of playing PC games at the 4K (roughly 3820×2160) resolution with smoother frame rates than anything else out there. Of course, this is overkill if you happen to be running a lower 1920×1080 monitor but these cards are not geared to the average consumer but at those looking for the highest level of detail possible with either a single or multiple monitor setup.

The big problem with AMD’s offering has been noise. The graphics cores are being pushed to the limit which is resulting in lots of heat. Without proper cooling, the cards reach their thermal limits and eventually throttle back on the power consumption in order to prevent the card from damaging itself. All good GPUs and CPUs have this sort of feature built into them now. What is different is how AMD is dealing with it. Rather than trying to get an improved cooling solution, AMD has stuck with their tunnel design they have been using for years. While it works, it generally needs to run the fans at fairly high levels to keep up performance or it ends up throttling back its performance. So, buyers either have to sacrifice the performance of their cards or suffer more fan noise.

NVIDIa decided that the reference design for their new GeForce GTX 780 Ti would use the same cooling system that was introduced in the TITAN cards. While it is a more expensive cooling solution, it happens to be extremely effective at cooling down the graphics core while producing very little noise. In fact, under heavy loads the Radeon R9 290 and 290X cards have been known to reach up to 60dB while the GeForce GTX 780 Ti settles down around 52dB. That’s a very significant level of noise that most anyone just about anyone would potentially notice even with good speakers or headphones.

I’ve already mentioned that the Radeon R9 290 cards are using more power than the NVIDIA GeForce GTX 780 Ti cards. Under load, the differences are not as dramatic as it may seem. In fact, the difference really falls within a few percent points of one another. One would assume that with the same amount of power that the heat issues would be the same but they are not.

The Radeon R9 290 graphics cards are much larger than previous generations. With the increased surface area of the graphics core, there is greater resistance and as a result more heat. The heat then has to be pushed out of the system by the fan and cooler on the board. Whether in the Uber or Quiet modes, the cards still have a tendency to get over 90 degrees Celsius which makes them extremely hot. The thermal cutoff tends to be set at 95 degrees which means that if the cooler can’t keep up, it will throttle back the speed of the card to keep the temps down. The result is a level of variability in the performance of the card depending upon the conditions of the computer.

In contract, the NVIDIA GeForce GTX 780 Ti with its more expensive cooler does a much better job at cooling down the system. In typically gets to around 82 to 84 degrees Celsius under the same load conditions. This is well below the thermal throttle temperatures which means that the card offers a steady level of performance.

AMD has released some new beta drivers to try and fix this variability problem but the result has tended to be increased fan speeds and as a result extra fan noise.

Frankly, this is the only area where the NVIDIA’s latest graphics card does not have a distinct advantage against AMD. The retail price of the cards has been around $700 to $750 for the GeForce GTX 780 Ti compared to under $600 for the Radeon R9 290X. This makes the GTX 780 card roughly twenty percent more expensive for less than ten percent better performance. The thing is, at this point most buyers looking at these two cards are likely to be willing to spend a bit more. After all, the current 4K displays are over $3000 and even multiple monitor setups can get over $1000.